PagaBags + Ouagadougou = Pagadougou. In this section of the blog, we bring you stories, anecdotes and news from our time in Ouaga. In this instalment, Meredyth tells us the most important lesson she learned working in Burkina Faso: relativity.

There I was in Ouagadougou, 7 am on a hot morning in 2007 and I was waiting for my taxi, chatting with the hotel night guard. How is it going? I ask. “Ça va un peu,” he smiles. “A little”? I had never heard that before.

I learned quickly that in Burkina people do not complain; they deal with things as they come. And besides, what good is it complaining if “c'est Dieu qui décide” (God willing). This was my overture to a long series of cultural encounters, and the first step in understanding the concept of it’s all relative.

Time is relative in Burkina. Fifteen minutes later, and I was still waiting for my taxi. I called him: “Where are you?” “I am at the light,” he said. Ten minutes went by, and with it much of my patience. I called him again: “Where are you now?” “I am at the light,” he repeated. “Which light?” “Je ne suis pas loin!” (I am not far) he insisted. Please don’t tell me that distance is also relative?!

While waiting, an artisan approached me, “Nassara,” he said (“white woman” in Morée, the local language). I admired his ingeniously created bicycle made out of scrap metal. “Wanawana?” How much?  I asked. “How much will you give me?” What was it worth? I did not know the answer. Neither did he.

By the time the taxi arrived, the sun had come up, the temperature had already reached 85°. By noon it would go up to 105°. I could just imagine my toes cooking. The driver told me he had been held up at the airport waiting for his brother who was arriving on the night flight from Morocco. Seemed like a fair excuse. I later learned that someone’s “brother” is not necessarily a relative. So much else is relative, why should family be an exception?

I was first sent to Ouaga to work on waste management in the framework of a solidarity project. My mission was to help organize waste collection through sorting and recycling of municipal waste. This led me, unexpectedly, to work with women.

In Ouaga, it is women who eke out a living collecting waste for tens of thousands of homes. These unofficial waste collectors struggle to make a living in the peripheral neighborhoods where the pavement ends, where water is bought from fountains outside the home, where plastic bags and domestic litter proliferate in the streets only to be burned in refuse piles later. While I cringe at the thought of the pollutants entering the atmosphere, at least this avoids plastic pools of disease-infected water and relieves the gutters, where plastic tends to amass, causing major flooding during which families helplessly watch the water rise as the walls of their earth and brick homes crumble.

Relying on my experience planning and implementing development projects, I decided in 2012 to start PagaBags to have a way to recycle plastic bags while creating jobs and improving health. I felt good about the challenge. And I was especially looking forward to launching a project that would allow me to work closely with the women waste collectors I had partnered with when working at an NGO. I brought these women onboard from day one. They would collect and sort the plastic bags; I would buy them and recycle them. Next I had to set up core team of cutters and weavers. They would have to be trained to weave with a combination of plastic and cotton. I would do the design and seamstresses would do the rest. 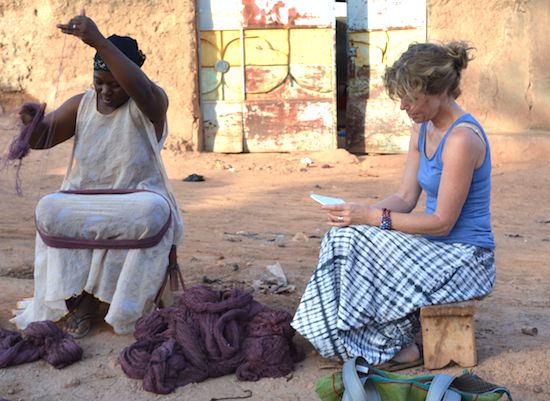 I have spent the past 3 years observing, listening, thinking things out, readjusting my plans and expectations…everything takes so much more time than anticipated. And yet, I have maintained my high expectations around the heart of my business. “Bilbilfou”, little by little, they say with undying reassurance. To this I often hear myself say, “Yelkabé”, no problem! This has become my credo, because I have learned through patience and conviction that that while women’s rights can be decreed, empowerment cannot.  You don’t make or give empowerment. It is born and develops over time, given the right conditions and opportunities, because a woman’s desire to follow her own path is indeed universal.

So, here I am, 2017, genuinely committed to PagaBags, deeply fond of my team of women (and a few men), happy that we are on track.  And fully aware that time, money, distance, family, is all relative – all, that is, except for women’s rights and the heat.